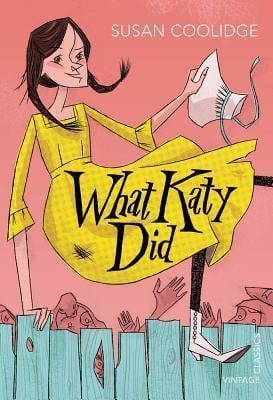 The boisterous, tall, unstoppable Katy Carr will win your heart in her struggle to become good

'I mean to do something grand. I don't know what, yet; but when I'm grown up I shall find out'

Katy Carr is the longest girl that was ever seen. She is all legs and elbows, and angles and joints. She tears her dress every day, hates sewing and doesn't care a button about being called 'good'. Her head is full of schemes and one day she plans to do something important. But a great deal is to happen to Katy before that time comes...

BACKSTORY: Learn some splendiferous vocabulary and find out which character you most resemble.

About the author
Susan Coolidge

Susan Coolidge was born in 1835 in Ohio, USA. She worked as a nurse during the American Civil War, after which she started to write. She based her best known Carr family from What Katy Did on her own siblings. She also wrote What Katy Did at School, What Katy Did Next, Clover and In the High Valley.Susan Coolidge lived in America from 1835 to 1905. She was born into an upper class family and her real name was Sarah Chauncy Woolsey. She worked as a nurse in the American Civil War and then began her writing career. Her editor was also the editor of Louisa M Alcott who was having huge success with her book Little Women. The editor suggested that Susan try her hand at the same kind of family story and the five books about the irrepressible Katy Carr followed. They followed the fortunes and misfortunes of the Carr family, from childhood, through school and travels in Europe, to marriage. The books: What Katy Did, What Katy Did at School, What Katy Did Next, Clover and In the High Valley brought fame to Susan Coolidge. The titles of the first three books are a pun on the North American grasshopper-like insect, the katydid, whose noise was not only responsible for its name but inspired Susan Coolidge!The characters in the books are especially lifelike because, without doubt, they're based on members of the author's family. Susan herself was tall, quick-witted and impatient - like Katy; Katy's three sisters are Susan's three sisters, and Katy's two brothers are Susan Coolidge's brother and cousin.Susan Coolidge devoted her life to her literary and social activities. As well as children's books, she wrote poetry and edited the letters of Jane Austin and Fanny Burney.
Read less